Block Protocol, a project that launched earlier this year that aims to build a universal block system, has announced a new WordPress plugin coming in early 2023. It will allow users to embed interactive blocks that are compatible with Gutenberg. Given WordPress’ footprint on the web (43% by W3Tech’s estimate), this plugin is a major milestone on the project’s roadmap for supporting a more interoperable and open web with blocks that can be shared through a standardized protocol.

The Block Protocol plugin will give users access to the global registry of interoperable blocks. These include interactive blocks for drawing, a GitHub pull request overview, a timer, calculation, and more. Once installed, users will see these blocks available in the inserter. The newest versions of the blocks are always available to users without having to update the plugin. Creators of the Block Protocol are also releasing a few new blocks alongside the plugin, including an OpenAI DALL-E-powered image generation block and a GPT-powered block for generating text. 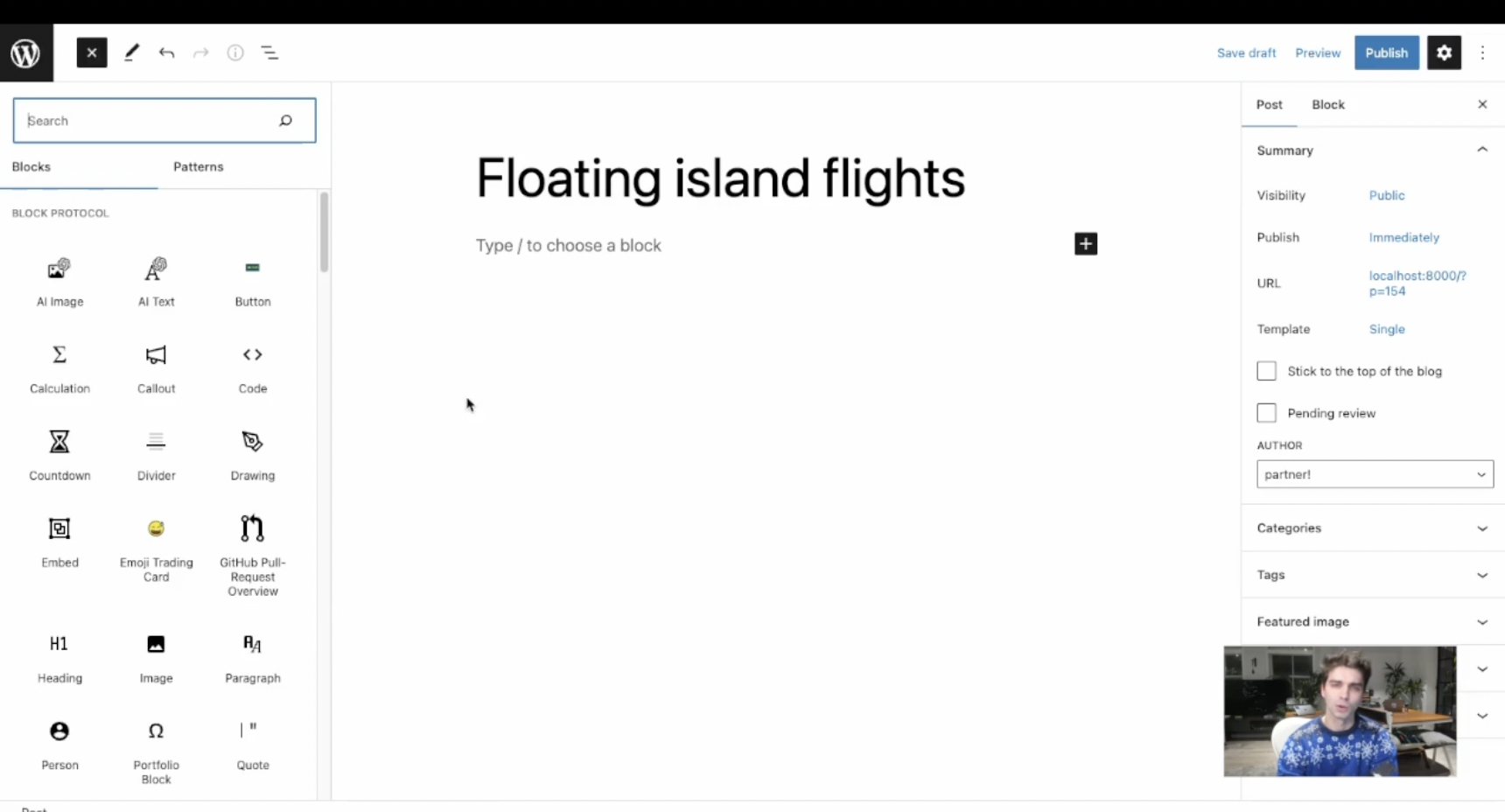 This announcement comes just days after Matt Mullenweg’s 2022 State of the Word address, where he was asked about Gutenberg potentially collaborating with the Block Protocol project.

“Sometimes developers don’t like to work together on the same thing,” Mullenweg said in response to the question. “And so it’s part of why there’s like 200 CMS’s and stuff like that. Sometimes there might be a stylistic or a technical change that when you look at it, you say, ‘I can’t use this thing that exists. I’m going to start something that’s different.’ And I think that’s a little bit what’s happening with Gutenberg and the Block Protocol.”

Mullenweg confirmed that the projects have been communicating but were not able to get onto the same page.

“They feel like there’s some things, either choices in Gutenberg or ways we develop things, that just are incompatible with how they see it happening,” he said. “We’ll see where that goes in the future. We’ve tried to make it CMS-agnostic so it can be embedded in anything and re-skinned, like you saw with the Tumblr example, it can be totally different. Everything we’re doing is open, so I would hope that wherever they end up, Gutenberg blocks could maybe be embedded, if there’s a translation layer or something like that.”

Mullenweg sounded optimistic about the possibility of interoperability between Gutenberg and Block Protocol’s specification where users could copy and paste blocks across applications.

“Maybe they create something really cool, that’s open source,” he said. “And then we’re like, ‘oh, let’s bring that over to Gutenberg,’ so the innovation can flow both ways, and sometimes that’s only possible if you’re starting something from scratch.”

Since the Block Protocol project is open source and designed to be an open protocol, Mullenweg said he considers it “like a cousin project,” and hopes that WordPress can integrate more in the future.

“If not, that’s okay too,” he said. “Maybe this will just be an alternative ecosystem that can experiment with new ideas or maybe things we would say no to, they can try. And then we see how it’s adopted by users.”

The initial draft of the Block Protocol spec is being incubated by the team at HASH, an open source data, modeling, and simulation platform. HASH is using the protocol in beta. The current version of the spec will be deprecated as of v0.3, which is anticipated to arrive in February 2023 alongside the WordPress plugin.

“I obviously can’t speak to what Automattic are officially thinking about the Block Protocol, but we’ve been energized by the community’s continued interest,” HASH CEO David Wilkinson said.

“Thanks to WordPress’ open architecture we can prove out the Block Protocol first as a plugin, giving users today the ability to access Block Protocol blocks within WordPress, and build blocks themselves that work not only in WordPress, but in HASH and other Block Protocol embedders, as well. In time we think that the value in having a standard way to write blocks which work across apps will become self-evident.”

Wilkinson said WordPress was the most requested CMS from Block Protocol users, as it is the most widely used, but he also has a personal connection with the software.

“WordPress is near and dear to my heart,” he said. “I built my first websites with it, have worked with it for more than half my life (!), and have a huge amount of respect for the organization and operation behind it. It’s the obvious platform to start with.”

The Block Protocol team has received requests for support from users of more than 50 block-based applications, and the project is currently running a poll to help identify the next one on the roadmap.

Even though the Block Protocol and Gutenberg projects did not find an acceptable way to combine efforts, WordPress users will get the best of both worlds with the new upcoming plugin. At the moment, access to Block Protocol’s Hub of blocks doesn’t offer any functionality that is superior to what is found in core WordPress and other native block plugins. The addition of the OpenAI-powered blocks will help make it more compelling, and the protocol’s ability to work across apps may bring an influx of more interesting blocks in the future.