Matt Mullenweg’s State of The Word, 2018

After two years of development and just after WordPress 5.0 officially launched, it’s not surprising the focus of Matt’s talk was on Gutenberg. “We’ve gotten a lot of questions about why we are doing certain things… why we are working on Gutenberg. And it’s good to return to users to find that,” Matt acknowledged.

A video of new WordPress users testing the classic editor (WordPress 4.9) was shown projected on the big screens over the stage. These clips primarily showed people having difficulties with relatively simple tasks in the editor.

Matt’s point was that we’ve become accustomed to the custom editor’s quirks, but blocks offer a better experience — from copying and pasting from Microsoft Word and Google Docs into WordPress to quickly creating a responsive website.

Matt continued with a summary of how Gutenberg has performed in Phase 1 of its release. Before the WordPress 5.0 release, 1.2 million active installs and 1.2 million posts were published, with about 39,000 posts written daily. Phase 1 had 8,684 commits and over 340 contributors. The ‘Gutenberg’ tag is already available for plugins in the WordPress repo, and it will be “coming soon” for themes.

Notably, over 100 Gutenberg themes are already present in the WordPress repo — including the new Twenty Nineteen theme. Matt highlighted two websites — The Indigo Mill and Lumina Solar — as examples where Gutenberg blocks have been used well to create effective layouts. Matt riffed on the “Learn JavaScript Deeply” mantra by repeating “Learn Blocks Deeply.” Blocks are the DNA of the new editor. Currently, 70 native blocks and over 100 third-party blocks exist for Gutenberg.

He highlighted some of the third party blocks in the wild:

Matt mentioned several block libraries and frameworks that have appeared:

Matt gave the audience an update regarding the WordPress native mobile apps: In the past month, app users published 1.3M posts and uploaded 3.1M photos and videos. Gutenberg will be going into the mobile apps, with a beta release expected in February 2019; I heard February 22nd is the current target date for a beta release.

The Next Phases of Gutenberg

Matt highlighted the next phases of Gutenberg’s evolution, which included new information about Phases Three and Four:

Fundamental blocks for writing and editing in the backend editor. These are complete now, although Matt later said that work on the editor would continue.

Customizing outside of the page/post content will be the next point of emphasis. It may include widgets, menus, and miscellaneous content. Matt notes that menus “will need a bit more experimentation”. “2019”.

Collaboration, multi-user editing in Gutenberg, and workflows. The target for this to phase to be complete is “2020+.”

“An official way” for WordPress to support multilingual sites. Also slated for “2020+.”

There were several non-Gutenberg tidbits of note:

On a list of items to work on in 2019, Matt said he wanted to make it a goal to add optional auto-updates for plugins, themes, and major versions of WordPress.

A proposal written by Gary Pendergast makes a case for WordPress to start updating its minimum PHP versions. The proposed plan is to move to PHP 5.6 by April 2019 and to PHP 7.0 by “as early as” December 2019. Notably, security support for PHP 5.6 expires in a few days, and the “end of life” for PHP 7.0 just passed.

After Matt mentioned this proposal, it received an enormous amount of applause — far more applause than most of the Gutenberg news that came earlier, and Matt noticed. It is definitely welcome news!

During the life of the WordPress 4.9 branch, there were over 173 million downloads with 68.4% of all known WordPress installs running 4.9.

Matt notes that the early adoption numbers for WordPress 5.0 were very similar to WordPress 4.7, which was also a December release back in 2016.

Matt took time to summarize the lessons he learned in 2018, starting with the need for teams to improve how they work together: “There should be no reason for accessibility, testing, and other teams not to be working together since these features should be a feature of everything we develop from the very beginning.” No doubt this came as a response to the concerns about accessibility in Gutenberg that surfaced before WordPress 5.0 was released.

And with that, he began Q&A.

You can view the State of the Word on YouTube in full, and it should become available on WordPress TV very soon. 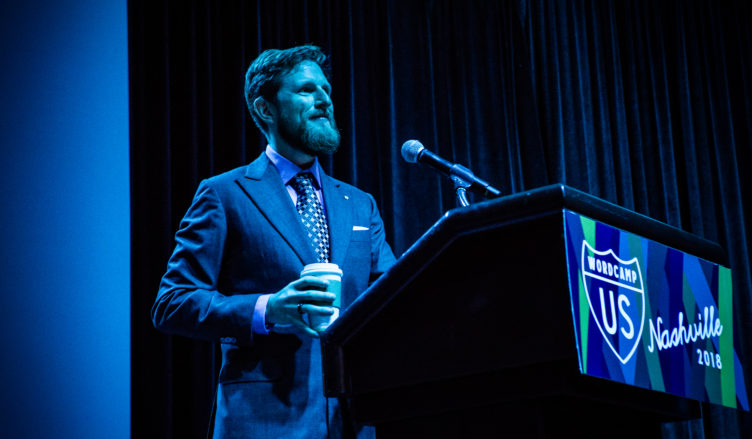